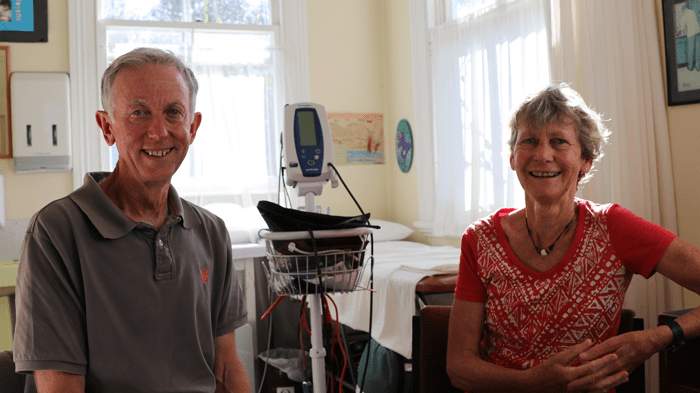 For the past three decades, Kāwhia’s medical needs have been serviced by Dr John Burton and wife Sue, a qualified medical lab technician.

In that time, they’ve developed strong connections with the community and tackled its medical trends like diabetes, given more than 200 medical students the experience of a remote rural practice, and raised three children.

The decision to purchase the small rural medical centre was the result of a road trip around New Zealand, in which the couple was trying to figure out where they would like to settle after a year in Africa.

They were travelling in an old Otago Hospital Board issue car nicknamed ‘Slime’ for its colour and joked wherever it broke down would be where they stayed.

‘Slime’ didn’t break down and made it all the way to their final stop – Kāwhia.

Where they had stayed overnight in every other location, they only had a few hours to spend in Kāwhia before they had to be back in Auckland.

“But I think John saw enough and it piqued his interest,” Sue said.

“We had no idea what a gem we stumbled on.

“It has been the most marvellous place to both practice and to raise a family.”

The couple celebrated their 30th anniversary with a small gathering at their home.

John said practicing medicine in rural locations was special because the work stretched further than the four clinic walls.

The mother of a friend, who was a district nurse, inspired him to pursue a career in the field when he had just started his surgical round in his first clinical years.

She helped shape his perception of patients away from “the appendix in bed one” and “the gallbladder in bed two” and towards learning about who the person actually was, their family and what their life was like.

“It was such a different approach,” John said.

“She put the person into a real-life situation, not just the patient in bed one.

“I found it just fascinating, that’s one of the first thing that got me excited about general practice.”

The late nurse Sharie Cain was one such nurse and John’s main collegial support in his first several years of operation in Kāwhia.

“She was quite a legend in herself,” Sue said.

“When John’s talking about these nurses who were a stalwart for rural GPs, she would be an example.”

Sue and John had a rich history working in rural locations internationally and prior to moving to Kāwhia had worked in a small mission hospital in the west African country of Benin.

They experienced there a model of staffing the hospital whereby locals with an interest in medicine were trained up to carry out various duties.

“These guys had watched dozens of hernia operations, c-sections, and while they’d never seen the inside of a medical school they knew the inside of a body quite well,” Sue said.

The rural civilians were trained to perform specific jobs and did them well.

John said the hospital had three doctors to service a community of more than one million people and he would arrive at work in the morning to 200 people waiting to be seen.

“They basically looked to what resources they had and used local people,” he said.

At various points during their tenure in Kāwhia, Sue and John have taken time to travel and work in various locations internationally, many of them rural.

They worked rurally in Australia, Fiji, Vanuatu and Canada and in urban centres of China and Vietnam.

Each trip functioned as both a holiday and an opportunity for John to gather more experiences which could benefit the Kāwhia community when he returned.

“Each of these breaks we’ve had has actually given us new tools for working back in Kāwhia,” John said.

“I came back each time refreshed and with new ideas.”

For most of their time in Kāwhia Sue and John have taken on medical students, who have ranged in experience from fourth year to postgraduate, to show them the realities of a rural practice.

They have taken most of them into their home for the duration.

“Part of wanting to have them stay with us is that John wanted them to see it’s more of a blurred line between work and family life at home, but the way that can work,” Sue said.

John and Sue were passionate about promoting general practice, including in rural locations, to medical students.

The feedback from one going into the surgery field, was if she had more positive experiences in general practice, she might have chosen to become a GP.

From their experiences overseas they knew locals could be trained up to perform specific duties and would like to see a shift in the way medicine is taught so students were not set on urban living, like many are by the time they get to their rural placements.

Although John said he had no plans to slow down yet, it was important succession planning begin with medical students learning to love rural areas.

Story reproduced with our kind thanks to Brianna Stewart, King Country News.

Liza has been a GP for over 15 years, initially in the North of England and now in Gisborne, New Zealand. She's recently joined Pinnacle MHN as GP liaison for Tairāwhiti.

The Taranaki locality team is participating in the Oxfam 50 km, 18 hour challenge on 20-21 March 2021. The walk is to raise funds for Oxfam’s campaign against poverty in the Pacific and around the world.

The Children's Act came into effect on 1 July 2015. Learn what is in a worker safety check, download resources to help with this and learn more about our police vetting service.